skip to main | skip to sidebar

The name Easter comes from the Anglo-Saxon's Goddess of Spring, Eastre: the Rites of Spring, renewal and fertility, were celebrated by pagan peoples such as Norsemen to whom this meant the season of the growing sun. For all, bonfires and the candle – light - were important parts of the custom.

Throughout Europe Easter fires were lit on top of mountains, and new fire kindled – by rubbing sticks together – representing the pagan practice of honouring the strength of the Sun, longer days, shorter nights, rebirth and fertility. 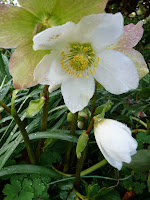 For early Christians the Paschal Moon (from the Greek Pascha, Passover), the full moon of the Passover, seems to have set when Mary Magdalene entered the Garden in darkness but the Resurrection was revealed to her at sunrise. So these devout men spent the night before Easter day deep in prayer, illuminated only by the moon. Other men, believing the light would come, walked through the fields or climbed hills to see the Sun Dance.

For some reason many of us associate candles with Christmas time and the end of it, Candlemas, but in fact the candle is a more important symbol at Easter. In centuries past, on Easter Eve, the church was unlit until the candle was kindled by flint and steel. Then all other candles were lit from it to light the building.

The Paschal candle – which is always of beeswax, the purest wax – came to represent Christ, the Light of the World. In the Middle Ages in England this candle, obelisk in shape, was to lifted to "within a man's length of the roof", where it was lit by "a fine convenience" – an early match?

In some churches today the church is still left in darkness whilst a bonfire is lit outside to symbolise the coming light; the priest blesses the new fire, the symbol of Christ's Resurrection, and lights a candle from the new fire. This Paschal candle is then taken into the church from which the congregation light their candles. This Easter vigil includes a blessing of water as a sign of purification and water from the font is sprinkled over worshippers gathered there.

But way before this, in medieval England, on Easter morning households would strike new fire in the darkness –'need fire' as they called it – believing that the straw would not catch unless all fires and lights were put out first.

The yew in the churchyard was a symbol of life and it is the English or Irish yew that is the one true evergreen of Easter: the symbolic green of eternal life. And, apart from green, only the white of Resurrection is seen on the altar: narcissi, arum lilies, blackthorn or hellebore perhaps.

The swift and mysterious hare was thought to be sacred to Eastre – it would seem I have a thing about hares – and the hare was thought to lay eggs which it left in the grass for children to find. Today the hare's place has been taken by the Easter Bunny – a plebby upstart – but children still love searching for the eggs hidden in the garden and enjoy eating them just as much! 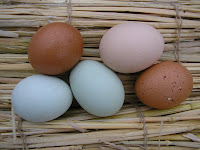 The egg was an object of wonder and the source of new life to primitive people and eaten whether it be that of the thrush, the pigeon, duck, chicken or goose. And from before Edward I's time, these Easter eggs - life's emblem - would be boiled in dye, which left them a beautiful blue, rose red or marbled green, and eaten for breakfast on Easter morning. If time could be afforded, a design could be scratched on the eggs with a steel pin.

When religious fasting was the norm – and the eating of eggs not allowed - the end of it, Easter, was a time to celebrate and eat all those other good things that had been denied. Throughout villages and in the manor houses of medieval England lamb and veal, capons, ducks, beer and bread, spiced cakes, custards and pies were prepared with care and eaten with joy and relish: Easter, then as now, was a time to eat eggs and rejoice in the light.

Hey, what's this, it's snowing here! That's not part of the deal, this is Easter not Christmas, I was looking forward to the sun.
Posted by Lucy at 09:31