skip to main | skip to sidebar

An apple a day

Apples come in all sorts, shapes and sizes and that, say the supermarkets, is the problem: they don't stock locally grown apples because we – the customers – want blemish free uniformity. Apples must be either green or red, glossy and symmetrical: forget the flavour. But October apple festivals and farmer's markets show that this is not true: not only do we want the tasty old varieties, scabs and all, but we're prepared to pay for them.

Henry VIII encouraged his gardener to produce better fruit, which he set about doing in his nursery close to Brogdale in North Kent. In 1806, the Horticultural Society in Chiswick, London recorded 1,400 varieties of apple: the society moved in 1875 to Wisley and then to the horticultural research station at Brogdale in the 1950's.

This is now the Brogdale Horticultural Trust (www.brogdale.org) where the National Fruit Collection is and where research into gene bank, grafting, stocks, plant identification, cultivation and so on is undertaken. A guided tour of the Trust is not only informative but fun too, viewing the orchards from the back of a tractor trailer, and there are unusual varieties of the fruit for sale in the shop there. 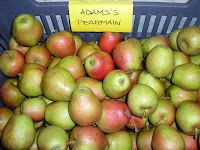 But the government puts minimal value on this sort of research: little investment is forthcoming to fund this most well-known fruit. March 2008 is crunch time: the management trust is out for tender and then…...who knows.

The cultivation of the apple (Malus domestica) is part of our national heritage; apple orchards part of our historic landscape. The sight of Kentish apple orchards in glorious bloom – snowy white froth or pink tinged petals - is absolutely beautiful and draws coach loads of tourists. Generally apple trees tolerate a wide range of soil types and like the British climate, some varieties doing better in one part of the country than another.

In Scotland 'dooking for apples' was a favourite game at Halloween: children, hands behind their backs knelt down and tried to catch an apple from several floating in a tub of water. If you caught the apple you kept it: more often than not a good soaking was had, everyone falling about laughing at the efforts. We loved it. In England it's called 'bobbing for apples' but this old game played around Bonfire Night is less well known now. The eating of toffee apples, though, remains as popular as ever at this time of year.

As a child my parents grew varieties of desert and cooking apples, the rows of trees set out in rows on a north-south axis: one for every month of the winter. And every day we took one to school for break. Beauty of Bath, Laxton's epicure and fortune were eaten straight off the tree; Worcester pearmain would last till October, as would Ellison's orange and James Grieve. From the last half of September until November we would eat Laxton's fortune, pioneer and Lord Lambourne. 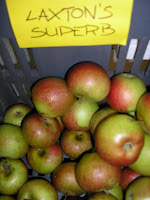 Then Cox's orange pippin - so often eaten too early - was best from late November until February with Laxton's superb ready late in December right round to March. In supermarkets we expect to find our favourite apple all the year round: lost is the concept that the apple changes as it matures which gives it a quite different taste and texture. Some apples best cooked in November have become eaters by the following March.

Apart from cider making (see my blog archive April, 30) the preservation of the fruit was always part of the housewife's work in centuries past: apple chutneys and jellies were made as was apple cheese. Apple sauce accompanied roast pork, apples were casseroled with game birds and a roast goose was stuffed full of them.

In the United States apple pie is considered as American as can be, and why not: the golden delicious apple was discovered in Virginia, 1895, and the variety Jonathan even earlier in the 1820's. But in England, where hundreds of apple varieties have been grown since Roman times, we've lost our appreciation for the many famous varieties of the past and the methods of cooking them.

During my childhood Sunday lunch was always accompanied by a pudding and ten to one it would be made of apples. Early Victoria was used for apple crumble, cobbler or Charlotte because it cooked down to a soft consistency: for apple pie or stewed apple Reverand Wilks was favourite because it kept it's shape. And for baked apples – stuffed with currants and brown sugar and served with custard – it was our Monarch, Warner's king or King Edward VII varieties that we used. Nowadays in supermarkets there is the ubiquitous Bramley, rarely any other. 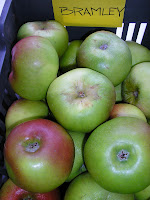 We can buy attractive, clean, blemish free apples wherever we shop: what we cannot necessarily buy is flavour, distinctiveness and variety. But, nevertheless, they remain packed full with other good things: an apple a day still keeps the doctor away.